Renowned violin teacher, Anna Baget has diversified his career in Spain, the United States and South America.She participated as a speaker in the first meeting of music 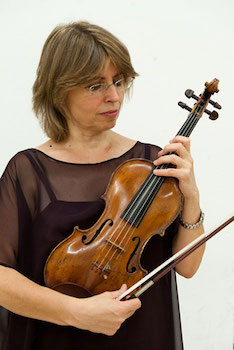 teaching organized by the Fundación Albéniz in Madrid, with professor Marc Bleuse, former CEO of Music in Franc; the director of the Junior Department at the Guildhall School in London, Eric Hollis; Derek Rodgers, Professor at the same center; the composer and conductor of the North Carolina School of Arts, Larry Smith, and composer Gideon Waldrop, former director of the Juilliard School in New York, as well as Professor Lev Vlasenko, of Moscow.

Her interest in education led her to develop and systematize teacher training techniques of string, being regularly invited to teach courses, lectures and seminars by different national educational associations, both public and private, including the Ministry of Education and Science,National Youth Orchestra of Spain (JONDE), Comunidad Autónoma de Madrid, País Vasco University, University of Alcala de Henares, Castilla La Mancha University, Andalusia University "Stage de Música de Cambra", "Course for teachers and professors of Stage Music 2000" of "la Caixa", Tarragona Province, School of Music of the City of Barcelona.In the spring of 2002 he was invited to teach master classes at the Paris Conservatory Gossec and perform a concert tour with his students for a variety of cultural institutions in Paris.

She is violin Professor and director of the Violin Ensemble at the Conservatory of Music "Adolfo Salazar", in Madrid.

She has taught violin being Professor Rainer Schmidt´s assistant in the School of Music Reina Sofia and the Summer School of Lucena.

Born in Barcelona and formed in the same city under the supervision of Gerard Claret and Goncal Comellas and by grants from the Caixa of Barcelona and the Ministry of Culture continues her training at Indiana University (USA) where she obtained a Master Degree in Violin and Pedagogy and studying with teachers Franco Gulli, Yuval Yaron and Mimi Zweig (violin); and Gyorgy Sebok, Menahem Pressler and James Buswell (chamber music). She has also received lessons from other teachers such as: Jose Ramon Hevia, Piero Farulli, Agustin Leon Ara, Lluis Claret, Gimenez-Atenelle Albert and Henry Kowalski.

He was a member of the Symphonic Orchestra of Madrid and Reina Sofia Chamber Orchestra, Bellas Artes Quartet and the Matisse Ensemble.

As a soloist she has performed with the Chamber Orchestra "Soloists of Catalonia", Quito Symphony Orchestra and Pamplona Symphony Orchestra "Pablo Sarasate". Currently and since 1984 she forms a duo with pianist Hannibal Bañados with whom she has toured and gived concerts in Spain and South America".

A number of her students have won prizes in various competitions. Many of them are studying in the most prestigious schools, others dedicate their professional lives to teach and others perform as members of different Spanish and European orchestras.