Violinist. Born in Benaguasil (1973, Valencia) where his first contact with music comes from his father, clarinetist and teacher at the “Centro Instructivo Cultural Unió Musical de Benaguasil”, where he receives his first violin 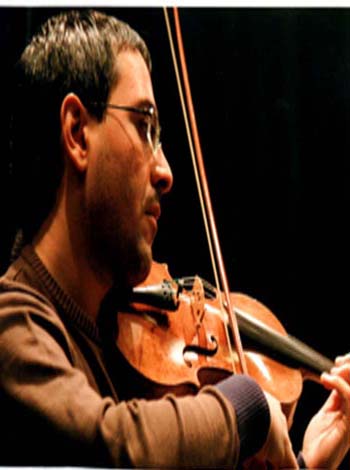 lessons with Agustín Sánchez. He developed his further education in the Music Conservatory “Joaquín Rodrigo” of Valencia with Catalina Roig and Juan Llinares, achieving an end of degree honorific mention. He continues his education at the “Musikhochschule” of Detmold (Germany) and in St.Petersburg with Anna Laukhina.

He has attended further training courses with Víctor Martín, Mark Lubotski, José Luis García Asensio, Félix Ayo and Marta Gulyas. He has been a member of the Valencian Community Orchestra, which inaugurated the “Auditorio Palau de les Arts” of Valencia in 2005. Amongst others, he has been conducted by Lorin Maazel, Jesús López Cobos, Adrian Leaper and Miguel A. Gómez Martínez.

He has shared stage with Mstislav Rostropovich, Pierre Amoyal, Christian Zimermann, Salvatore Accardo, Ainhoa Arteta and Plácido Domingo. He has collaborated with the Philarmonic Orchestra of Gran Canaria and with the Palau de la Music Orchestra, after being chosen by Miguel Ángel Gómez Martínez.

He has been a violin teacher at the Ribarroja Music School, in Valencia, at the Rheda-Wiedenburg Music School (Germany) and in the Professional Music School of Alcañiz.

From 2002 and until current days, he has a violin teacher through a state exam of the Music School “Tomás Luis de Victoria” in Ávila and a pedagogical adviser of the Youth Symphonic Orchestra of Salamanca. He has performed as a soloist with the Youth Symphonic Orchestra of Salamanca in a commemorative concert of the 10th Anniversary of Salamanca as a cultural city, performing the concert of M.Bruch. He has directed and organized the Music Summer Courses of the Universeity of Salamanca and of the Obra Social Caja de Ávila.

Jesus Plaus currently plays a violín A. Rabinovich of 2017.