Violoncellist. Born in Odessa, Ukraine. At 7 years of age began studying cello with Joseph Zhadan in the prestigious Music School for Gifted Children Stolyarsky of Odessa. 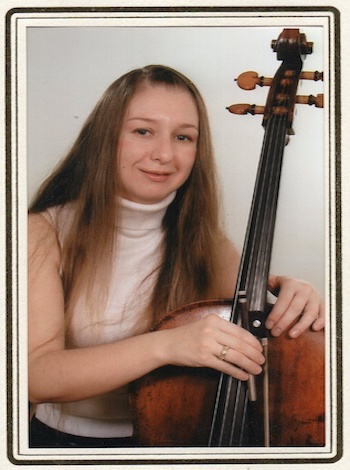 Extensive studies with Eva Sigal, Anna May and Oleg Shkarpytny in the State Conservatory of Odessa, obtaining the diploma as a Magister and Doctor in Musical Art, under the direction of Valentina Balon-Remashévskaya. She completed her training studying with Daniil Shafran, in Moscow, and in Masterclasses with Christoph Henkel, in Freiburg. Awarded in the National Chamber Music Competition, Kiev, 1990.

At 12 years of age she had her debut as a soloist with the Odessa Philharmonic Orchestra, playing F. J. Haydn's Concert in C Major, in a concert in which she shared soloist part with violinist Maxim Vengerov. She performed as a soloist with the Odessa Philharmonic Society. She has participated in recitals and festivals in Spain, Ukraine, Serbia, Czech Republic, Germany. She was invited as Principal Cello (1992-1997) by the Symphony Orchestra of the Opera and Ballet Theatre of Odessa.

From 1992 to 2007, she was teacher in theCello and Chamber Music Chairs at the Odessa Superior State Conservatory. During this period she wrote several works on the technique and violoncello performing, published by the Ministry of Culture and Art of Ukraine (1999-2000).

Currently she combines her activities as a soloist, forming part of chamber ensembles, with her pedagogical and teaching work. She has performed in Spain at the Madrid National Music Auditorium, Juan March Foundation, Conde Duque Auditorium in Madrid, Tres Cantos Auditorium, Gijón's Jovellanos Theatre and Santander Auditorium. Her concerts have been recorded by the Spanish National Radio and Television: RNE and RTVE.

She collaborates with the Spanish Philharmonic Orchestra (OFE). She has collaborated with the RTVE Symphony Orchestra, Madrid Academic Orchestra, Chamber Orchestra Siglo XXI. Her pupils study in the best music education centres of the world (Juilliard School, Stuttgarter Musikschule, Musikschule Freiburg, Conservatory of Basel, Spanish Conservatories, etc.) and are winners of national and international prizes and competitions. Recently in the contest Jaime Dobato Benavente for Young Promises.